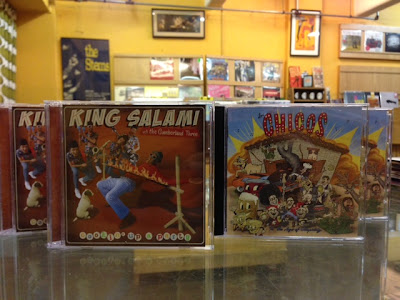 It’s one of my regular rants, but the 21st Century really does suffer from a dearth of good, original R’n’B (no, not Rhianna, rhythm and blues you fools). I mean, the trad rockabilly circuit has got the classic rock n roll sounds covered, but where’s a boy supposed to go when he’s finished with Ray Charles and wants something with a bit more teeth?
Step in London’s King Salami and The Cumberland Three. Playing a potent blend of sausage-influenced gonzo rhythm and blues, fronted by the eponymous maraca brandishing King Salami, part manic Screamin’ Jay Hawkins, part Symarip-style gang leader, this is just the tonic for a world that’s forgotten how to dance.
Following up nicely where 2010s Fourteen Blazin’ Bangers left off, I suppose perhaps the extra-special ingredient in the King’s secret recipe, beyond the mans own charisma, is a big dash of punk energy from ex-members of The Parkinson’s, amongst others. Yeah, I didn’t see that one coming either. It’s not a direct musical link, but you can see some of that vibe soaking through in these two and a half minute blasts.


You could argue that maybe this is a bit of a 50s/60s Americana throwback, and yeah there is the odd knowing wink to the High School Dance et al, but really, good rhythm is timeless. Thoroughly recommended for anyone that likes to move their hips, click their fingers and swing, as well as just going a bit mental.

Los Chicos is a five-man rock’n’roll machine constructed from the best parts of all the best components of 20th century rock’n’roll and rythm’n’blues. They put the ingredients into the mix...and then kick the livin’ shite out of it! It's a sound that, on stage, explodes into a powerful and exhuberant rock'n'roll party.

Featuring a line up that makes the Cramps’ audience at Napa State look normal – a fast talking highclimbing frontman, a shaven-headed evil Doctor Pineapple, a bubble-permed bassist, and last but not least the only real twin guitar team treading the boards today, Spain’s best band gather new fans everywhere they go. It's your turn next!

For this, their fifth album, recorded in the summer heat of Madrid in four days and mixed in another three by Mike Mariconda, Los Chicos have collaborated with well-respected Spanish artistes such as Josele Santiago from Los Enemigos and Hendrik Röver from Los Deltonos.

There cannot be a more direct, more raw, less artificial recording available today. In the Spain of today this is the only way to deal with the problems, primarily economic, affecting Spanish society and the band members in particular: beer, good parties and much laughter. And this comes out in the recording, along with a dash of anger. And, in part thanks to the current climate, this may be the most powerful sound they’ve ever achieved.

Email ThisBlogThis!Share to TwitterShare to FacebookShare to Pinterest
Labels: King Salami and The Cumberland 3, Los Chicos, Off The Hip Records

The Tramps have been a crucial and constant part of the Perth live music scene for a good long while now, but it’d be disingenuous to try and say that their new LP, “Cal Peck and the Tramps”, hasn’t been a long time coming. Happily, in this instance, the anticipation does not exceed the actual event; the wait has been worth it.

Under the watchful eye of producer Andy Lawson, the Tramps have laid down fourteen sort, sharp, shoot-from-the-hip tracks that distil their audacious live sound into a rock solid album. The standout songs? It’s hard to say. “Leave Me Be” sounds like a thesis on theatrical heartbreak, but it’s matched by the band’s strident cover of Joe Neal’s “Don’t Quit Me Baby.” Just when you’re caught in the mistaken notion that the album is all mid-tempo malaise and heartache, along comes “Bump D’Bump” to pick things up. And, of course, perennial favourite “Cinnamon” gets a look-in, and it’s never sounded better.

The secret’s in the mix. Cal and company know that there’s no joy without sadness, and vice versa; there’s no rock without regret, no swagger without sorrow. It’s their understanding of that strange emotional alchemy that makes them a great band, and this a great album.

And even if that doesn’t grab you, it’s got a beat and you can dance to it.

and shot through with a rock and roll rhythm that won’t quit. It’s Cal Peck & the Tramps, a four piece outfit whose musical ethos is built around the notion that feeling bad and sounding good aren’t mutually exclusive.

Formed in 2008, The Tramps - frontman Callum Peck, bassist Byron Robertson, Drummer James “Bangers” McKay and harmonica player Dave Benck - have developed an indelible musical identity that draws on a range of disparate influences and fuses them into something wholly unique. Combining the youthful, rebellious anger of ‘60s garage rock, the damned-if-you-do. hard rain worldliness of delta blues, and the electrifying strut of ‘50s rock and roll, Peck and company deliver home truths and hot tunes in way that is direct, accessible, honest, and unforgettable.

Cementing their reputation early on with the six track demo they recorded with Andy Lawson of Debaser Studios, which included the wildly popular song “Cinnamon.” “Cinnamon” subsequently became the title track of their debut EP, recorded at Cellar Sessions Studio and nationally released through Firestarter Music in August 2009. 2010 saw the release of their second EP, “Kill For You,” with the track “Isn’t Hard to See” receiving national airplay. In 2011, the band release the double a side “Break Out” on their own label, Hurricane Records. Again, this has received nation-wide radio play, as well as heavy support from RTR fm in Perth.

Throughout this period, Cal Peck & The Tramps have honed their live show, earning a reputation as one of the best live acts in the Perth scene, fulfilling residencies at Devilles Pad, Mustang Bar and The Newport Hotel and appearing at events such as The Beaufort St Festival, Northbridge Festival, Blues at Bridgetown, Hope From Ashes Toodjay Benefit, The One Movement showcase. In addition, The Tramps have supported such acts as Reverend Horton Heat (USA) and Heavy Trash (USA).” WAMI nomination for best blues act in 2010.

This year will see the release of The Tramps first full-length album released on renowned Australian Label Off the Hip Records, again recorded with old sparring partner Andy Lawson. Already one of the well-regarded original bands in Perth, 2013 promises to be the year in which Cal Peck punches through to the next level.

Email ThisBlogThis!Share to TwitterShare to FacebookShare to Pinterest
Labels: cal peck and the tramps, Off The Hip Records

Thanks to all the bands and customers who came down to the shop for our record store day celebrations, we had a blast. For those of you who missed out here are a few videos taken by Carbie Warbie and photos by Tim Chuma. 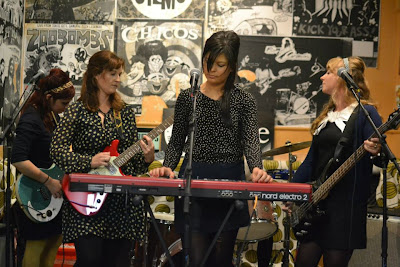 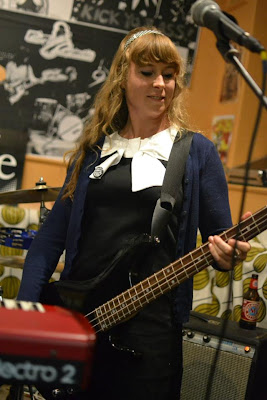 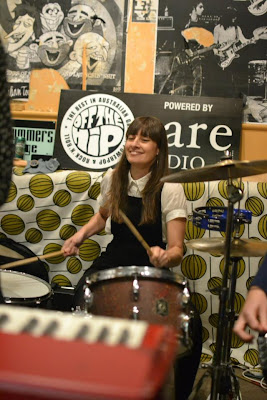 Digger and The Pussycats
Digger & The Pussycats - You Drive Like A Cunt (Record Store Day) @ Off The Hip, Melbourne (20th April 2013) from Carbie Warbie on Vimeo. 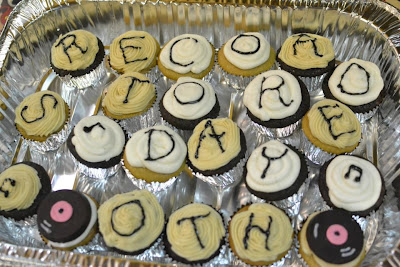 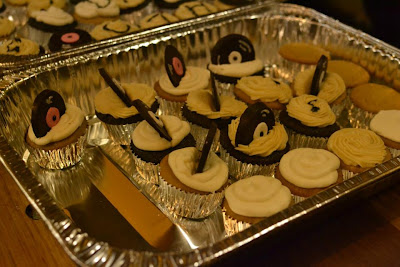 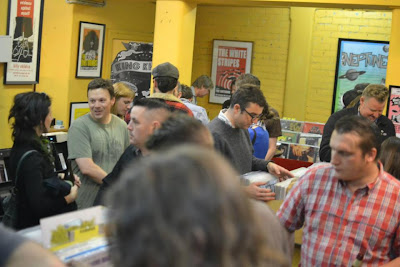 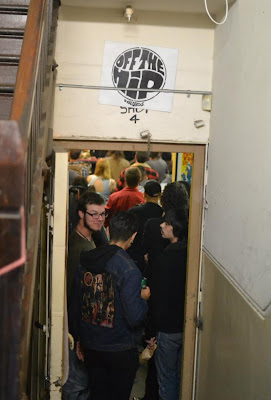 Email ThisBlogThis!Share to TwitterShare to FacebookShare to Pinterest
Labels: Digger and The Pussycats, Mass Cult, Off The Hip Records, Record Store Day, The Interceptors, The Reprobettes

"The Kids Are All Wrong" screening 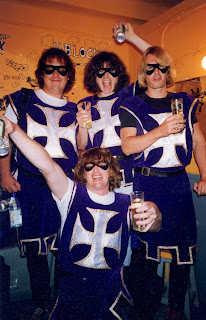 Off The Hip Records & Black Diamond Productions are proud to present an advance screening of Thee Crusaders documentary "The Kids Are All Wrong", Friday 26th April @ Luwow, free entry from 7:45pm, with screening 8pm sharp. Touted as Australia's wildest garage-punk outfit, this made-for-TV documentary contains footage from their 22 year career, including video from their first gig, thru to their better known 'masked', or purple, period. Tour footage from Spain and America interspersed with candid behind-the-scenes moments; see Sir Kendall work his hair (on and off the stage), wonder at Sir Chris's never quite intune guitar, gape at Sir Mickster's preference for the "spew-posie" and you'll run out of fingers counting the number of stubbies that smash into Sir James's head armour. "The Kids Are All Wrong" will be released late 2013 as part of Thee Crusaders 3xCD, 1xDVD boxset on Off The Hip Records. This advanced screening is just for you, but don't keep this secret all to yourself.

Read about in on Mess and Noise here
Posted by Jerk Pity at 7:13 PM No comments:

Email ThisBlogThis!Share to TwitterShare to FacebookShare to Pinterest
Labels: black diamond productions, Off The Hip Records, The Crusaders, The Kids Are All Wrong

Rocket To Memphis' 4th CD "Do The Crawl" invites you to join the band on a hip-dislocating adventure through a fresh batch of infectious tunes and wild sounds! It was cut at Yo-Yo studio in Perth but once again the band worked with Heavy Trash guru Matt Verta-Ray, who mixed the album in New York, in hurricane conditions!

From the irresistible "GoGo" - a 60s-style rock n roll stomper which opens the album, Betty Bombshell and her incendiary compadres drag you through rockabilly ("Turn It On"), Diddley-esque swamp ("Swamp Guy"), the sexy "In Black and White" and finish up with "Rockin' All Night" - which y'all WILL be if you follow this simple 11 step programme!

Forget the Watusi, the Twist and the Squirm... this here's the CRAWL - and you gotta learn!

Get yourself a copy and dig the crazy sound of ROCKET TO MEMPHIS.
Posted by Jerk Pity at 7:09 PM 1 comment:

Email ThisBlogThis!Share to TwitterShare to FacebookShare to Pinterest
Labels: Matt Verta-Ray, Off The Hip Records, rocket to memphis

Listen up vinyl junkies... here's a wild 45 that you'll be racing to get on the turntable!

The A-side "Go Go" is the dance-floor stomper that opens Rocket's brand new album - it's a gritty, 3 minute anthem for a dolled-up, hip-shakin' night on the town. The flip is a smouldering version of "You're The Boss" that'll get you up to all sorts of things on the
dance-floor later in the night!

Mixed by Matt Verta-Ray and wrapped in a killer Lluis Fuzzhound sleeve, this limited edition, neon-blue platter is a double-headed winner!
Posted by Jerk Pity at 7:04 PM No comments:

Email ThisBlogThis!Share to TwitterShare to FacebookShare to Pinterest
Labels: Lluis Fuzzhound, Matt Verta-Ray, Off The Hip Records, rocket to memphis

In a daring public exhibition in 1837, Mr Robert Cocking released his parachute and promptly launched himself into eternity. In 2013 the Green Circles launch their 4th album Mr Cocking's descent.
With this new release, the Green Circles invite you to climb into their basket and soar into the psych/garage/jangled sky.

These four dashing aerialists showcase their daring with guitars that have six and twelve strings, bass guitars with four, wailing organs, drums, a tambourine, a saxophone, and various sets of vocals cords. It's taken more than 80 days to launch, but they have landed eleven new tracks – nine originals and a couple of covers originally performed by band faves the Screaming Believers and the Ninth Wave.

From the riff and harmony laden I can't see the day and I'll give you thanks to the tough, overdriven Time comes and Semaphore Girl, the dreamy Love tinged Flown and the deep psych groove of Watermelon sugar blues, this Green Circles collection shows how far they have travelled since they first took off in Adelaide.

Previous releases Tavistock Street, Brass knobs, bevelled edges (and in 23 different positions) and Get on the outside of this have received rave reviews from all over the globe and Mr Cocking's descent is destined to go down in history as their hottest set yet!

Mr Cocking's descent - out now on Off the Hip Records
Posted by Jerk Pity at 6:44 PM 1 comment:

Off The Hip Records